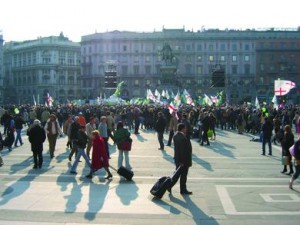 In last month’s election a right wing coalition led by Silvio Berlusconi swept to power in what could turn out to be Italy’s strongest government since the Second World War. A new electoral system is likely to mean that the government, unlike its predecessors, is not constantly in thrall to political parties on the margins in order to stay in power and may actually govern for its full five-year term.

Whether the controversial Berlusconi turns out to be the right leader to reverse Italy’s economic decline remains to be seen. Economic growth has been at the bottom end of the European league for years and this year the economy is expected to stagnate. Recently the EU’s statistical office announced the humiliating news (for Italians) that Spain had overtaken Italy in GDP per capita.

“Italy’s economy is very much linked to its politics and the country has suffered from a lack of economic reform, but it’s possible that the new government may push through changes,” says James Noble, a partner at in Milan. He adds that even though there are some weak individuals in the new government, they are not in key economic positions.

Others, however, are less convinced that significant change is on the horizon.

Marco Fumagali, head of in Italy, says: “Historically, politics has had little effect on the economy for good or ill and Italian business has kept on running its course. Having said that, the new government seems to be predominantly pro-business.”

The new government does not have a hard act to follow. The nine-party coalition of Romano Prodi was regarded by many as having failed to tackle the economic problems that have made Italy the most uncompetitive economy in Europe.

The two Communist parties in the coalition constantly criticised the government, which finally fell when a tiny centrist party withdrew support. Among the main challenges the country faces are a highly rigid labour market in which it is virtually impossible to shed staff, a pubic debt to GDP ratio of more than 100% and a bloated public pension system.

But there may be some concerns about how open to foreign investment Italy will be under Berlusconi, given his comments about troubled airline .

The protracted sale of a 49.9% stake in the airline has become a hot political issue as the main bidder, , plans to reduce flights from Milan’s airport and cut the workforce by a third. Berlusconi has urged Italian investors to buy Alitalia, which is losing €1m a day, and keep it in Italian hands.

Despite all these problems, the Italian private equity market appears to have been less affected by the global credit crunch than most other European countries. Much of this may be due to the fact that Italy is primarily a mid-market location, with only one or two large deals on average each year.

“Because the deals tend to be smaller there has traditionally been less leverage, and so the credit problems have had a smaller impact,” says Giovanni Gazzaniga, a partner at Allen & Overy.

Leading banks such as and are not thought to have been exposed to the sub-prime crisis.

Fumagali of 3i, says: “The market here has been a bit more benign than the rest of Europe because the banking and acquisition finance community was less involved in sub-prime investment or large LBO lending.”

He adds that private equity in Italy is still a relatively small part of the overall economy and that the total funds outstanding for LBOs are about €12bn, which is a small fraction of total bank assets.

“Even though the number of buyouts in Italy has increased from 40 three years ago to 70 today, there is still a lot more potential growth,” Fumagali says.

In fact, last year was a very good period for the Italian buyouts market. According to industry body AIFI, it was a record year with a total amount invested of €4.2bn. As in previous years, the vast majority of investment went on smaller companies with fewer than 250 employees. Fundraising by Italian funds was up by a third on the year before.

“We didn’t see a significant decline in the second half of 2007, partly because some transactions that were begun in the first half closed in the second, but also because the lending banks were less affected by the credit crunch,” says Mara Caverni, a partner at PricewaterhouseCoopers in Milan.

She adds that first quarter 2008 figures were fairly comparable to the same period in 2007, although there has been a slowdown in syndications.

“Since Bear Stearns, there haven’t been any major shocks and I think if things stay fairly stable we’ll see a return to a more normal financing market after the summer,” she says.

Caverni also flags up recent fundraising by southern Europe specialist Investindustrial as an indication of the Italian market’s positive prospects.

In February, announced the close of its fourth southern European buyout fund at the hard cap of €1bn, exceeding its original €800m target within three months of launching. New investors in the fund included , and .

One of the clouds on the horizon, however, has been changes to tax laws by the Prodi government that restrict the amount of interest that can be offset against tax in LBOs.

The limit is now 30% of Ebitda, says Caverni, adding that this measure may be reversed by the new government. Others note that the issue only affects larger LBOs with high multiples and that these kinds of transactions are not currently being done in Italy.

Among the deals to close in the first quarter was ’s sale of vending machine operator to UK-based house and . The deal was Cognetas’s first since it opened in Italy in 2006. After acquiring Argenta in 2005 Advent adopted a buy-and-build strategy, integrating 11 acquisitions to double sales to about €150m.

There are also a number of significant deals in the pipeline. Italian broadband operator is up for sale and could be worth US$2bn. It is not clear if there will be private equity interest as the main potential bidders are thought to be strategic buyers such as Telecom Italia, BSkyB, Carphone Warehouse and Vodafone.

Another potentially large deal could be the sale of , which manufactures automatic vending and coffee machines and is controlled by Argan Capital and Merrill Lynch Global Private Equity. It has a turnover of around €400m.

There is also expected to be significant interest in Italy’s fashion and luxury goods companies, which have benefited from rising incomes in emerging markets economies in Asia and Russia, as well as the Middle East. These businesses are now looking for new capital to fund expansion in new markets.

Last year, Permira bought Valentino for US$3.8bn and an auction process is being organised by for fashion house . PE houses including Blackstone, Carlyle and CVC are reported to be interested in the company, which could go for €1.4bn.

Last October Cavalli reportedly valued the company at more than €2bn but since then stock markets have fallen and the global economic outlook is less positive, which will almost certainly result in a lower price being paid for the business.

Two other Italian fashion houses that are larger than Cavalli – and – are planning to sell shares in stock market listings later this year, as long as market conditions permit.

Another, , said in March this year that it, as well as its leather goods unit , had been approached by PE houses. was reportedly interested in buying a stake of just over 40% in Antichi Pellettieri. Other funds, such as , are also reportedly interested. Both Mariella Burani and Antichi Pellettieri are units of Burani Designer Holding, listed on AIM.

Among the pan-European funds active in Italy has been 3i. Last October it acquired lawn mower manufacturer Global Garden Products for €730m and in April 2008 announced that it would be selling its majority stake in toy company Giochi Preziosi to Clessidra and Banca Intesa. 3i took its stakes in the company in 2005 and 2006 in a buyout worth €521m. The current exit has a transaction size of around €800m.

3i’s Fumagali says that although the Italian market appears to have been less affected than other European markets by the credit crunch, that may not last:

“When the rest of the world is doing well Italy is often a bit behind and when things flex down it takes more time for Italy to follow,” he says. “Private equity is one of the world’s most globalised markets so Italy will probably be more affected going forward in terms of financial volumes.”

According to Deloitte’s Noble, valuations have begun to fall and there is likely to be continued activity in the mid-market.

“The funds are full of cash and there is pressure to spend,” he says. “A lot of the private equity guys built relationships with particular banks in the pre-credit crunch period and if those banks feel they were treated well in the good times they are more inclined to lend in the current market, even if borrowers have to pay an extra 50 basis points on the interest and can’t get the same multiples as before.”