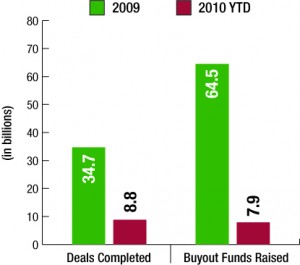 The bump reflects the final close of ’s second fund, , at $1.8 billion, which came in shy of the New York firm’s lowered $2 billion goal. From the Lone Star State, The recording a final close on , which raised a total of $820 million, well ahead of its $600 million target.

Also included in the mix is the $325 million secured by for its third buyout fund, which is targeting $400 million, and the $21 million collected by for its $100 million-targeted first fund.

Firms have been active on the buy-side, as well. Thomson Reuters, publisher of Buyouts, tracked the completion of 26 new LBO transactions from March 9 through March 23. Only a couple of those posted financial terms, however, which combined for a total just $251.2 million—inching the year-to-date deal tally to $8.8 billion.

The largest of the disclosed deals was ’s purchase of QuadraMed Corp., a Virginia-based provider of health care information technology services. The transaction was valued at $151.2 million.