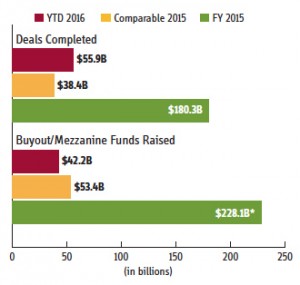 U.S.-based buyout and mezzanine fundraising surged over the past two weeks, with the year-to-date total growing from $27.8 billion to $42.2 billion. It still trails where it was at this time last year by $11.2 billion.

Deal-making continues to be active, adding over $10 billion to its year-to-date value over the past two weeks. The yearly total now sits at $55.9 billion, $17.5 billion ahead of the same time last year. The top deal was for LeasePlan Corp NV. The Dutch provider of car leasing services was acquired for nearly $4.1 billion by the LP Group BV, an investor group comprised of the Abu Dhabi Investment Authority, merchant banking division of Goldman Sachs Group, Stichting Pensioenfonds PGGM, GIC Pte Ltd and TDR Capital. Another noteworthy deal was for RealD Inc. The manufacturer of digital 3D motion picture systems was bought by Rizvi Traverse Management for about $521.2 million.