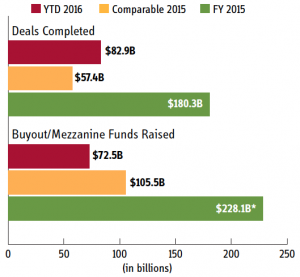 A bevy of funds reached final close since Buyouts last went to press.

Parthenon Capital Partners hit the $1 billion hard cap for its fifth flagship; Lime Rock’s fourth fund didn’t live up to its $850 million expectations but did raise $754 million at final close.

A fund close to closing is Cerberus Institutional Partners VI. Cerberus Capital Management has collected $3 billion on its way to the $3.5 billion target and $4 billion hard cap. Another notable fundraise: Post Oak Energy Capital with its tertiary fund. Post Oak Energy Partners III has not listed a goal but has corralled $600 million.

A pair of debut funds have been busy as well; Bayou City Energy  Management pooled about $159 million thus far, while Mountaingate Capital stands nearly halfway to its $300 million target with $148 million in commitments.

Deal-making had a healthy fortnight, with the year-to-date adding more than $6 billion. Blackstone Group acquired a shopping-center portfolio from Toronto-based RioCan Real Estate Investment Trust for $1.9 billion. Russell Investments, a provider of financial-advisory services, was absorbed by TA Associates and Reverence Capital Partners for $1.15 billion. 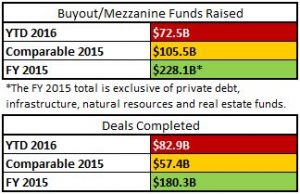