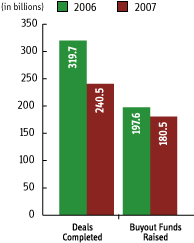 Among the highlights were Apollo Management completing its $2.0 billion take-private buyout of EGL Inc., a Houston, Texas-based logistics provider. The Carlyle Group and Onex Partners also closed their carve-out of Allison Transmission from General Motors Corp. for $5.6 billion.

Blackstone Group led the way in fundraising, finally closing its fifth fund on $21.7 billion. The fund is already 70 percent invested, which means Blackstone will be at it again soon. The firm will also be raising a $2.5 billion distressed securities fund, joining several other firms gearing up for a downturn. Elsewhere, Sheridan Production Partners has closed its debut fund with $1.3 billion, to invest in mature oil and gas assets located across the United States, while energy buyout group EnCap Investments is reportedly raising up to $2.5 billion for its seventh fund. The fundraising total, at $167.2 billion in our last issue, stands now at $180.5 billion for U.S.-based buyout firms.