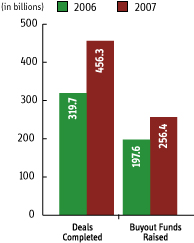 A total of 41 transactions closed since Buyouts last went to print two weeks ago. Fourteen of those deals had disclosed values that totaled approximately $3.9 billion. There was only one transaction of at least $1 billion, Candover Partners’ $1.1 billion sale of GET, an Oslo-based cable television operator, to an investment group led by Quadrangle Capital Partners and GS Capital Partners. Another of the bigger deals was the $525 million split-off of Windstream Corp.’s (NYSE: WIN) directory publishing business, Windstream Yellow Pages, to LBO shop Welsh, Carson, Anderson & Stowe. Year-to-date deal volume grew to $456.3 billion.

Meanwhile, buyout and mezzanine fundraising numbers totaled approximately $1.5 billion during the last two weeks, thanks largely to The Cartesian Group, which closed its debut fund with $1.05 billion in capital commitments. The New York-based firm was formed by Peter Yu, Bill Jarosz and other former executives at AIG Capital Partners. Year-to-date fundraising in the U.S. rose to $256.4 billion.