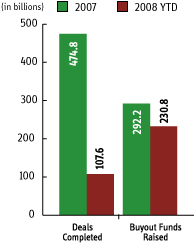 also pitched in, closing with more than $700 million in commitments. The fund, which had a $600 million target, will primarily focus on the manufacturing, consumer, health care, distribution and financial services sectors.

There were 28 LBO deals during the past two weeks, according to Buyouts’s publisher Thomson Reuters. The seven deals with reported prices had a combined value of $676.2 million. That brings the disclosed value of deal flow for U.S. buyout firms to roughly $107.6 billion so far in 2008.

The period’s largest transaction involved the acquisition of SSP Holdings PLC, a U.K.-based provider of computer and software consulting services, by H&F Sensor Bidco Ltd. for $392 million. H&F Sensor was formed for the purpose of making an acquisition by funds advised by .