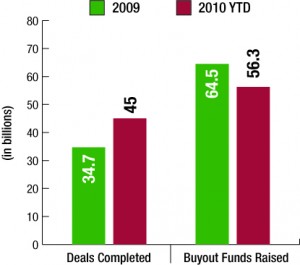 U.S.-based buyout and mezzanine shops have collectively raised $56.3 billion so far this year. of Houston, Texas, completed the fundraising drive of its debut fund. closed with $300 million in capital commitments, which is below the $350 million target the firm sought when it launched the vehicle in mid-2008.

Thomson Reuters, Buyouts’s publisher, tracked 10 LBO deals from Oct. 12 to Oct. 26. There were four transactions with disclosed financial terms and two of these were in the $1 billion-plus range. The four deals had an aggregate value of $5.4 billion and this brought year-to-date deal volume up to about $50.3 billion.

had its hand in the period’s top deal. The New York-based firm acquired Burger King Holdings Inc., a Miami, Fla.-based fast food restaurant owner and operator, through Blue Acquisition Sub Inc. The transaction has a rank value of $3.94 billion.

Correction: The Market At A Glance column posted on Nov. 1, 2010, misstated the year-to-date value of the deals that it mentioned. The original story incorrectly stated that the total was about $45 billion.