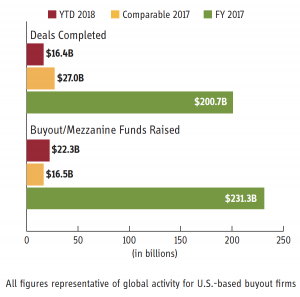 The cold of early February slowed the flow of U.S.-based buyout and mezzanine fundraising. Over the past two weeks, $2.4 billion in commitments was added to this year’s total, which now leads this time in 2017 by $5.8 billion, or 35.1 percent.

Blue Point Capital Partners finalized its fourth flagship, exceeding its $600 million target and closing on $700 million. The Cleveland firm concentrates on the manufacturing, business services, consumer and distribution sectors in the lower-middle market.

Carlyle Group is near to closing its seventh U.S.-focused vehicle. Thus far, the megafund has collected $14.4 billion toward its $15 billion goal.

The largest deal with disclosed value was for Buffalo Wild Wings. The global restaurant chain, which specializes in chicken wings, was acquired by Roark Capital Management — through its Arby’s Restaurant Group subsidiary — for just over $2.8 billion.

Following that was the transaction for Saddle Butte Rockies Midstream LLC. EnCap Investments bought out the entire share capital of the Durango, Colorado, provider of pipeline transportation services of refined petroleum for $625 million. 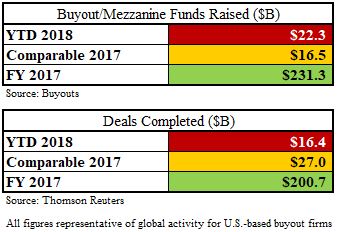