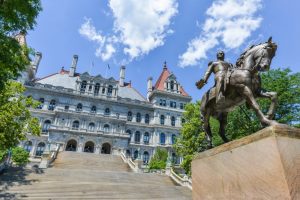 New York State Common Retirement Fund is keeping up a furious private equity commitment pace amid the coronavirus pandemic, and its private equity portfolio appears to be remaining relatively steady amid the chaos.

From February through June, NYS Common committed about $4.5 billion to private equity, according to the website of state comptroller Thomas DiNapoli. That is up from about $2.4 billion over the same period of time in 2019.

The 2020 commitments have been mostly to established, big name managers, reflecting the “flight to quality” that has defined private equity fundraising during the crisis.

Firms receiving commitments include Clearlake Capital Group, Vista Equity Partners, Francisco Partners, Ares Management, CVC Capital Partners, and KKR & Co. The commitments include a whopping $2 billion commitment to a co-investment vehicle run by Neuberger Berman, which Buyouts reported. This is the second such vehicle NYS Common has committed to with the firm.

The torrid commitment pace is different from the economic crisis of 2008 that stretched into the next year. According to records on the fund’s website, its commitments during that time were noticeably lower. NYS Common declined to comment for this story.

The commitments come after a strong year for the fund’s private equity portfolio, though no returns are available from the covid market-dislocation period.

The fund’s private equity returns as of March 31, 2020 were 11.64 percent over one year. NYS Common measures its fiscal years as of March 31, whereas most other LPs do so as of June 30 each year. PE returns are also reported on a one-quarter lag, meaning those returns are from before the market downturn.

The end of its fiscal year fell in the midst of the public market collapse that has been mostly recouped by the wider market. The same is true for NYS Common. According to a quarterly update released August 11, the fund’s value had increased to $216.3 billion overall by June 30.

Moreover, as of March 31 PE made up 11.19 percent of the fund’s holdings, but by June 30 that had decreased to 9.6 percent, reflecting likely gains in its liquid public equities to counter-balance the illiquid private equity holdings.

In a recent fireside chat at a California Public Employees’ Retirement System meeting, Hamilton Lane CEO Mario Giannini said LPs have learned from the previous economic crisis by avoiding the “single biggest mistake” of trying to time the market during disruptions like this one as opposed to sticking with their investment plan, as Buyouts reported.

Los Angeles County Employees Retirement Association chief investment officer Jonathan Grabel wrote a letter to his board in March admitting that LACERA’s decision to halt its PE commitments following the 2008-09 crisis was a mistake, as Buyouts reported.

Update: this story has been updated to reflect that NYS Common declined to comment.