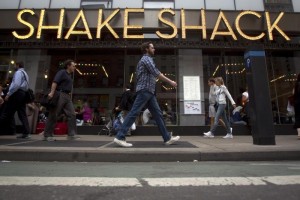 Shake Shack shares hit $52.49 in early trading on the New York Stock Exchange, way above their offer price of $21, before easing back to $48.

At the high, founder Daniel Meyer’s 21 percent stake in the company was worth about $390 million.

Meyer, who also owns popular New York restaurants Blue Smoke, Gramercy Tavern and Union Square Cafe, opened the first Shake Shack in 2004. Since then, the chain has won a near-cult following for its rich milkshakes, crinkle fries and hormone- and antibiotic-free burgers.

Shake Shack raised $105 million from its initial public offering. Underwriters J.P. Morgan and Morgan Stanley had originally set an expected price range of $14 to $16 per share, but later raised this to $17 to $19 due to strong demand.

Premium chains have been outperforming in the overall burger category, driven by demand from young, affluent consumers.

Sales at premium chains including Five Guys and Smashburger rose 9 percent in 2013, according to restaurant consultancy Technomic Inc, while overall sales at all burger chains including McDonald’s fell 1 percent.

The burger market, the largest dine-out segment in the United States, generated more than $72 billion in sales in 2013.

Shake Shack has 63 restaurants, more than half outside the United States, many of these in the Middle East. The company has said it plans to open 10 U.S., company-operated restaurants each year and could eventually grow to at least 450 locations.

The IPO market has been fruitful for so-called fast-casual restaurant operators hoping to replicate the scorching growth of Chipotle Mexican Grill Inc. Chipotle’s shares, which listed at $22 in 2006, closed at $714.53 on Thursday.