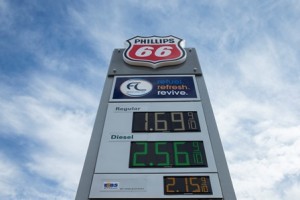 Still in a free fall from last year, oil dipped well below $50 a barrel in the opening two weeks of 2015 on expectations of a continued supply glut. Echoing the action, Jeffrey Currie of Goldman Sachs on Jan.12 cut his price forecast for West Texas Intermediate crude – the benchmark in the U.S. – to $65 a barrel from $80 in a move to adjust to a “new normal” in petroleum markets.

The price drops marked the end of a bull run in the energy sector dating back at least five years, when heavy investment in exploration and production proliferated behind growing domestic supplies delivered by horizontal drilling and hydraulic fracturing, or fracking. Now it’s all about cutting back expenses and focusing on fields with the lowest production costs.

Exploration and production (E&P) companies now “conserve cash as impressively as they spend it” as they wait for supply growth to slow enough to push up prices, Currie said. Capital expenditures have already fallen 25 percent and drilling has stopped more quickly than in previous bear markets, he said.

These market dynamics have chilled capital-raising both in public markets, where shares of public energy companies have fallen sharply, and in private market lending and purchases.

“The IPO window on the exploration and production side is absolutely closed,” said Gregory Randolph, managing director with Greenhill & Co. “Most of the people that own existing equity… don’t want to sell at these prices.”

However, private equity firms with capital to spend now see potential to back proven management teams keen to buy properties at depressed prices or to buy distressed assets, Randolph said.

“You’re seeing private equity firms now selectively looking at buying the debt of E&P companies that they regard as having promising assets,” he said. “I’m spending my day going out and talking to E&P companies that we think are probably over-levered and need advice on recapitalization. I’m spending more time on that now than I did a year ago.”

Greenhill recently beefed up its Houston office by naming Joseph Dilig vice chairman after he worked as a partner with Vinson & Elkins, a law firm that specializes in the energy sector.

Jason Downie, a former energy specialist from Hicks, Muse, Tate & Furst who co-founded Tailwater Capital, said the slowdown in drilling will likely help oil service pricing for E&P companies, which have some protection in price swings through use of hedges.

“This is the first time in five or six years where (exploration and production) guys have had the opportunity to put the screws to the service companies,” Downie said. “The first place you’ll see real pain is on the service side.”

Tailwater Capital just closed its Fund II with $650 million in commitments. The firm is shopping for deals, particularly oil and natural gas infrastructure assets that may be put up for sale.

“I don’t think anyone expected a price collapse of this magnitude this quickly, but the flip side is that it was overdue,” Downie said. “It’s an opportunity for the exploration and production sector in particular to help facilitate cost reductions with their counterparties that in the long run will help onshore drilling economics.”

Private equity firms will take aim at plugging balance sheet holes with structured finance or preferred equity, which will help good operators with weaker balance sheets hold their acreage, Downie said. On the other hand, “you’ll see guys literally not able to do that and go out of business or get consolidated,” he said.

But until oil prices stabilize, any mergers in the space may remain rare.

“We’ve seen M&A activity slow dramatically,” said David Brackett, senior managing director at GE Antares, which lends in the oil services sector, not exploration and production companies. “Everyone is trying to get their head around what the new normal is. Buyers and sellers have divergent views on prices right now. As things settle down in the second or third quarter, we expect to see a meaningful amount of activity. The winners will have an opportunity to consolidate.”

Deal-makers in the oil service space are also keeping a close watch on the pending $35 billion purchase of Baker Hughes by Halliburton Co for any possible divestitures during the deal’s antitrust review by the Federal Trade Commission.

Another source of deals could be Samson Resources, an oil producer backed by Kohlberg Kravis Roberts & Co, NGP Energy and Crestview Partners that is selling assets to improve liquidity. Samson’s debt was recently downgraded.

Laricina Energy Ltd, an oil sands developer in Canada, has said it may not be able to continue as a going concern after it defaulted on $150 million in debt notes issued by the Canada Pension Plan investment Board. The company launched a strategic review process last November.

No IPOs since October

Demand remains non-existent for fresh energy IPOs from sponsors. The last deals from the sector took place in October when SunTx Capital Partners-backed oil recycling firm Vertex Holdings went public at $13 a share. The stock has since risen nearly 8 percent as of Jan. 12.

October also saw the debut of USD Partners, a master limited partnership for rail terminals for oil producers backed by Energy Capital Partners. The stock has since fallen 13.5 percent from its $17 IPO price. (See accompanying chart.)

Of the 16 sponsored IPOs from the energy sector since the start of 2013, only five are trading above their offering prices, led by a 192 percent gain for E&P company Athlon Energy LP, a deal from Apollo Global Management. Eclipse Resources, an oil exploration firm in the Appalachian Basin backed by EnCap Investments, has posted the steepest decline in the group, with a drop of 79 percent since its IPO in June of last year.

The drop in equity prices in both existing and recently public companies may emerge as a major theme in quarterly financial updates in coming weeks from Carlyle Group, Blackstone Group, KKR and Apollo Global Management. Carlyle Group said on Jan. 9 that its fourth-quarter natural resources carry fund valuation fell 8 percent, while its legacy energy portfolio fell by 17 percent.

LPs remain interested in energy funds despite the drop in oil prices, said Jeff Eaton, partner at placement firm Eaton Partners. The older model of investing in the development of new energy acreage was more appealing when oil prices more than covered capital costs of drilling and production in most oil and natural gas fields.

“They’re still into it but they’re going to start to look at different opportunities,” Eaton said. “Allocations won’t decrease. If anything, they may increase. There’s a lot of interest in credit-oriented and distressed opportunities related to energy.”

Looking ahead, the move by energy companies to cut back spending on new production may soon create a better balance in commodity markets.