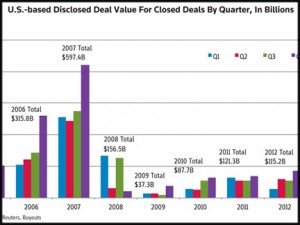 Deal-making returned in force in the third quarter, led by technology and health care, as sponsors regained their footing after a sluggish first half to nearly catch up to brisk year-ago levels.

Bill Sanders, managing director and global head of the financial sponsors group at Morgan Stanley, said transactions of $1.5 billion or less drew strong interest during the quarter, thanks in part to robust credit conditions.

“When you look at the number of smaller deals, the equity check size is often more than feasible by numerous buyers,” he said. “Public assets are getting expensive, which is driving more secondary buyout activity in this size range.”

Outside of these few large deals, the rubber met the road in the middle market.

“Small and medium-sized companies are loosening up and willing to step from the sidelines and onto the field to see what kind of valuations they can get for their businesses,” said Gene Urcan, managing director of investment bank Cappello Group Inc. “And GPs have a lot of dry powder for deals.”

With 12 deals, The Carlyle Group led the list as the most active merger participant among larger sponsors in the third quarter, followed by 11 for Blackstone Group, and seven for Bain Capital.

Audax and Riverside Co rang up seven deals each as the most active players in the middle market, followed by six deals from ABRY Partners and five for Insight Venture Partners.

As evidence of strong activity, the median price of all U.S. sponsor-backed mergers and acquisitions in the quarter rose to $148.3 million in the third quarter, from $114 million in the year-ago period.

Three deals that came closes to the median level were:

The heavy traffic in the middle market may have contributed to higher valuations in the quarter.

Purchase price multiples for leveraged buyouts in the United States rose to 8.5x EBITDA in the third quarter, from 7.8x EBITDA in the second quarter, according to S&P Capital IQ. Multiples still remained below the level of 9.1x EBITDA in the year-ago quarter.

Sponsors certainly tapped into ample credit opportunities during the quarter, as total high-yield debt drew $83.1 billion of issuances in the third quarter, up from $82.5 billion in the previous quarter.

“The latest leverage levels have shifted up…versus a slightly sharper decline in equity shares. This could be attributed to a few different things, but mainly due to more cash being available on the balance sheet,” said Reuven Shmulenson, analyst at S&P Capital IQ.

With 68 deals in the third quarter, technology showed up as the most active deal type, followed by 56 for industrials and 37 for materials. But deal-making remained relatively strong across most sectors.

“The economy was in such tough shape, it does seem that most sectors have recovered and are in a stable period of growth,” Lanser said. “Tech and health care seem to lead the pack, but we’re seeing across-the-board activity.”

While the slowdown in the first half puzzled some, the steady increase in economic activity in the third quarter helped seed more deals, Lanser said. “Overall, there has been a strong appetite for financing and a strong appetite to put capital to work. All the conditions seems good.”

“As the technology industry matures and more industrial companies focus on technology to supplement their growth, we are dedicating one of our senior investment professionals to exclusively focus on deal sourcing,” said Dipanjan “DJ” Deb, managing partner of Francisco Partners. “We believe this will only enhance our dialog with conglomerates, technology bellwethers and intermediaries to find the best transactions.”

Health care also turned in a strong showing with 31 deals as sponsors positioned their portfolios for changes tied to the Patient Protection and Affordable Care Act, more commonly called ObamaCare.

Paul Queally, co-president of Welsh Carson, said the firm has crafted its portfolio to address an expected reduction in health care reimbursements down the road  as the costs of the legislation rise.

“Our strategy is to back companies that provide value-added services to providers, physicians and insurers to help them cope with an increasingly competitive market,” Queally said. “An example of this is NaviHealth, whose model has been to develop partnerships with Medicare HMOs to deliver high quality, low cost post-acute care through increased alignment of goals and incentives among health plans, hospitals and providers.”

Regarding the quarter’s biggest closed deal, Bain Capital’s Managing Director Ian Loring said the $6.7 billion take-private deal for BMC Software capped off an effort that began more than a year-and-a-half ago.

After early approaches to BMC Software were rebuffed by the board, the company signaled it was willing to sell later in 2012.

“We had done a lot of work up front, with a differentiated point of view around the mainframe business, and around a capital structure that gave us an advantage, which enabled us to prevail,” Loring said.

While Bain Capital pulled off the deal, Loring doesn’t see many mergers in the private equity arena of similar size coming down the pike.

“There will be strong activity in businesses that have $50 to $150 million in EBITDA and trade for  $750 million to $1 billion,” Loring said. “But, there will be relatively few $5 billion plus deals. In most instances those are public companies, and given the frothiness of the markets, you’d have to pay a premium for going private. Until there’s a correction, I’d be surprised if a lot of those deals get done.”

While 2013 started with thin volume after a rush of deals at the end of 2012 to beat tax hikes tied to the U.S  fiscal cliff, the deal pipeline has now recovered in a big way.

An estimated 77 deals have been announced in the third quarter and not closed by U.S. sponsors as of Sept. 30, more than triple the year-ago level of 24 deals.

Among the major deals pending a close, the $6 billion acquisition of Neiman Marcus by Ares Management LLC and the Canada Pension Plan Investment Board from TPG and Warburg Pincus ranks as the largest.

“I continue to see an uptick in transaction volume in the $500 million to the $1.5 billion range,” said Morgan Stanley’s Bill Sanders. “It’s because there is enough equity to be put to work and financing markets are conducive to new deals. The U.S. economy, although not strong, is improving. With all that, people are trying to put money to work.”

“It certainly has picked up since August and going forward in terms of new deals announced and we’re seeing it on the secondary side of our business,” said Susan Long McAndrews, a partner at Pantheon, which manages $24 billion in private equity assets. “It looks like we’re heading into a pretty busy fourth quarter once again.”

“Financial sponsors are in the business of buying and selling companies—that’s what their LPs are expecting them to do,” Lanser said. “And there could be some pent up demand in 2014 for portfolio companies waiting for growth to accelerate.”

Among unfinished work this year, the $25 billion take-private deal for Dell Inc remains the 800-pound gorilla in the M&A arena as Michael Dell and Silver Lake drew an approving shareholder vote on Sept. 12 after activist investor Carl Icahn scrapped his effort to derail the deal. The blockbuster transaction, set to close in the fourth quarter, also generated a $10.6 billion financing package as further evidence of healthy credit markets.

In perhaps the firm’s only published comment on the deal since announcing it in the spring, Egon Durban, Silver Lake managing partner and managing director, told The New York Times the Dell deal offers long-term value.

“This is not just beachfront property; it’s a chance to own an island,” Durban told the newspaper. “This isn’t a broken business.”