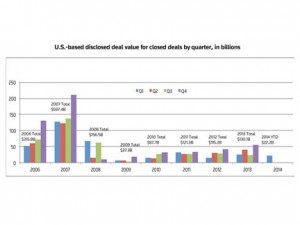 But they were careful too avoid overpaying, which resulted in a large number of add-on acquisitions and corporate carve-outs.

In total, U.S. sponsors closed 370 control-stake deals between January 1 and March 23, up from 338 in the entire year-ago first quarter but below the 421 tallied in the fourth quarter, according to Thomson Reuters. The latest quarter marked the largest first-quarter tally since the 423 deals recorded in 2007. With mid-market deals dominating, the dollar value of completed deals fell to $22.2 billion as of March 23, down from $27.1 billion in the year-ago period and below the $55.6 billion in the fourth quarter, which got a major boost from the closing of the blockbuster $19.3 billion take-private deal for Dell Inc.

In a more forward-looking indicator, deals announced and pending plus closed deals rose to 418 in the first quarter as of March 23, up from 353 in the entire first quarter in 2013 and down from 462 from the fourth quarter, traditionally the busiest three-month period of the year, according to Thomson Reuters. The latest quarter stands out as only the fourth time since the start of the 2008 financial crisis that the pending and announced deal count topped 400. Dollar volume of announced and closed deals rose to $60.2 billion, from $47.1 billion in the year-ago period, but down from the previous quarter’s total of $73.3 billion.

Hard data backed up sponsor complaints about having to pay higher prices. Average purchase price multiples for leveraged buyouts climbed nearly 4 percent to 8.7x EBITDA in January and February, from 8.4x in the year-ago period, according to S&P Capital IQ. But in a sign that buyout firms are putting their dry powder to work and avoiding excessive leverage, equity contributions in private equity purchases rose by 1.5 percentage points to an average of 35.5 percent in January and February, up from 34 percent in the year-ago period.

The announced $9.1 billion acquisition of Safeway Inc by Cerberus Capital Management LP’s Albertsons tipped the scales as the largest announced or closed deal in the quarter, but no other transactions broke the $5 billion barrier. Among closed deals, Kohlberg Kravis Roberts & Co’s $2.4 billion standalone buyout of insurance claims processor Sedgwick Claims Management Services Inc ranked as the largest. KKR also ranked as the most active acquirer in the quarter with 13 transactions.

“Compared to 2006 and 2007 it’s a healthier mix, it’s more diversified across sponsors, it’s more diversified across size of deals, and there’s no one mega-deal that’s leading the charge,” said Bill Sanders, global head of the financial sponsors group at Morgan Stanley. “It’s a much deeper, broader, healthier business—less levered, with more equity…”

The large, headline-grabbing deals of the 2005-2007 boom has given way to more smaller add-on acquisitions, which comprised 52 percent of sponsored deals, compared to about 48 percent for platform investments. That pattern continued in the first quarter after emerging in 2013.

“The ability to buy a nucleus, which is not a large equity check, and then invest in add-ons that are bite-sized around them—there’s a lot of ways to do that,” Sanders said. “People are very comfortable with a buy-and-build strategy, rather than trying to buy something large and then make it more efficient.”

While The Blackstone Group reportedly moved to buy building products and automotive parts manufacturer Gates Global Inc for more than $5.5 billion from Onex Corp and the Canada Pension Plan Investment Board, no formal announcement had come by the end of the first quarter. The firm declined to comment on this possible deal.

“When valuations feel like they’re a bit fuller and there’s a lot of liquidity in the world, you have to be creative in terms of the types of new deals that you do,” Vik Sawhney, senior managing director and chief operating officer of private equity for Blackstone Group, said last month at the PartnerConnect 2014 conference, hosted by Thomson Reuters, publisher of Buyouts.

Blackstone Group has been steadily tapping into Blackstone Capital Partners VI, its flagship, $16 billion buyout fund. It’s now about half-way drawn down three years into its six-year investment period—right on schedule, he said.

“Signature deals make good headlines (but) our mission is: someone gives us a dollar and we want to return two and a half dollars to them,” Sawhney said. “It’s about maintaining a return discipline, finding ways to create value in the businesses, and being flexible in terms of structure, industry and geography.”

He pointed out that Blackstone Group’s limited partners have voiced concern about prices.

“The biggest concern we’re hearing from LPs today is the feeling that valuations are getting a bit high,” he said. “That’s a note of caution I’ve been hearing from LPs in the last month or two”.

The deal included the creation of a joint venture and the taking of JLL portfolio firm Patheon private, among other components, to create DPx, a new platform.

“One of the driving elements of the transaction was that by putting the two companies together we’re looking at $100 million in cost savings over the next 18 months,” Levy said. “When you look at it that way, we’ll own it at about 7 to 7.5x EBITDDA, compared to publicly-traded comps in the pharmaceutical services business of about 11x to 13x EBITDA. We think we’ve created the company at a very attractive price level.”

JLL sees opportunities for better prices in small aerospace deals and some health care services firms with less exposure to regulatory uncertainty around Obamacare. But it’s hard to find deals at reasonable prices, he said.

Sponsors continue to try to gain an edge through tireless deal sourcing.

“Riverside used to just focus entirely on sourcing opportunities through our investment banking relationships,” she said. ”More recently, we’ve started to expand how our origination team looks for deals. They’re working more closely with our industry teams to try to identify more proprietary opportunities and to help in more targeted searches.”

Firm-wide, Riverside may look at 4,500 deals in a year globally and only about one third of those earn a mention in the firm’s Monday deal review meetings. It then ends up buying about 1 percent of the original group.

Among Riverside’s first-quarter acquisitions, it bought Pence & Associates of Kansas City as the third add-on for its Paradigm Tax Group platform  The firm has been investing out of Riverside Capital Appreciation Fund VI, which closed in January with at $1.5 billion in commitments, about 50 percent above its target.

Back in 2010, Arsenal started taking aim at the rapidly-growing US energy market and narrowed down candidates focused on chemical needs for oilfield services firms. Arsenal Capital found production chemical firm Danlin Industries and purchased it this year from Hastings Equity Partners. Arsenal Capital combined the company with portfolio company Kel-Tech Inc, a provider for field stimulation and drilling chemicals, to form Kel-Tech/Danlin.

“We looked for ways to leverage our core chemicals and materials expertise and we bolstered our network of senior advisers who had strong energy market knowledge, and then we spent three or four years, developing strategies and then hunting for assets,” Mullen said. “You have to compete first and foremost on your knowledge and expertise.”

Aging Baby Boomers looking for ways to cash out may provide another source for deals, said Warren Feder, partner and co-founder of the investment banking group at Carl Marks.

“If they’re shooting for the moon and their company doesn’t deserve it, then they’re not going to be happy where they’re going to end up,” Feder said. ”But if they’ve made a decision from a lifestyle point of view that they want to move on, then there’s a realistic shot you can find a deal that works for both parties.”

“We’re still in the early to mid-stages of the economic recovery; it is expected to continue to improve over the next year and thereafter,” he said.

Morgan Stanley’s Sanders said sponsors continue to step up if they can spot potential in a target that others may be missing.

“Almost everybody has new firepower, which amounts to $400 billion of investable capital,” Sanders said. “You still have a lack of opportunities to invest in on the debt side. People are still yield-hungry and yield-starved. So there’s big demand for leveraged finance paper. You’ve got a good equity market and an economy generally that’s got some growth. Yes, people think valuations are high but there seems to be at least one buyer who has a view for a unique story for growth for  almost every asset. And that’s all you ultimately need to get a deal done.”