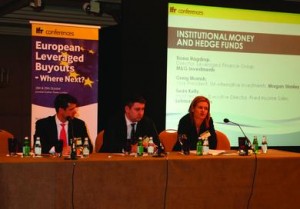 “These are unprecedented times in my history,” announced Simon Davies, vice president of the corporate advisory group in the London office of US alternative asset manager The Blackstone Group, at the launch of IFR’s ‘European Leveraged Buyouts – Where Next?’ conference. His words set the tone for the rest of the conference: sober reflection; painful dissemination; dogged determination.

Davies also provided counterparts to each of the industry’s milestones. Private equity has left no corner of the world untouched, but neither has the current financial crisis, and while globalisation had been helpful in the past, it has not been “in the current situation”. Despite the proliferation of the leveraged loan industry, for the past 18 months, banks have been “full of old leveraged loans”, while the implosions at Northern Rock and, more recently, the major retail banks saw “people flee in fear and without resistance”.

Quoting John Maynard Keynes, Davies indicated that the market would not change in the immediate future, nor would likely go back to private equity’s salad days of mega deals and bountiful leverage. “The markets can remain irrational longer than you can remain solvent,” said Davies, adding that “external risk to any current transaction looks daunting”, leading to a complete junking of the rush to buy, due diligence brevity and hastily constructed deals mentality.

In addition, secondary and tertiary sales are gone as a exit mechanism – a daunting prospect for an industry that has heavily relied on the swapping of assets as companies ‘move up to the next level’ – and lack of leverage and available buyers equals “no quick flips or dividend recaps”.

Niche players expected to capitalise on market dislocation were also notable by their absence. “I only know of three distressed buyers in the current market – three!”, stressed Davies, who suggested that “opportunity is there, but activity is not”, and that longer holding periods (“six years will not be unusual”) will affect internal rates of return, leading to great scrutiny of fund performance and, ultimately, “some smaller shops failing completely”.

This warning was echoed, with fitting irony, by one of the recent victims of the financial crisis. “The number of players in the game has been greatly diminished,” said Sean Kelly, formerly executive director, fixed income sales, at Lehman Brothers. “It will be a very different landscape when we come into a more balanced market. No-one knows what will happen next. Events of the last 12 weeks show that we were fundamentally not prepared.”

Speaking in the same seminar as Kelly, ‘Institutional money and hedge funds’, Fiona Hagdrup, director, leveraged finance group at M&G Investments, indicated that a ‘more balanced’ market might include fewer pension funds, a potentially disastrous loss to private equity. “Iceland will have stymied the move into the asset class for pensions for some time,” she said, referring to the collapse of Iceland’s banks and its subsequent impact on institutional investors, particularly in the UK.

There has been less impact on private equity’s mid-market, said Paul Gibbon, executive director, UBS Leveraged Capital Markets, in the afternoon session, ‘Is there mid-market where it’s at?’ Noting that the sector had returned to deal flow nearer to 2002-2004 numbers, Gibbon said that “the mid-market has always been there, you could argue, in some ways, that it is the market”.

Charlotte Conlan, head of leveraged syndication, continued the theme. “The question is: was the mega market a blip? The only difference now is that the mid-market uses a club deal approach for underwriting deals of €200/300m rather than just a single bank.”

In terms of origination, Ajit Madan, managing director and head of European leveraged capital markets at Societe Generale Corporate & Investment Banking said that practices were more or less the same, although the line from the sponsor had changed, indicating a change in the balance of power. “It has gone from ‘I want you to underwrite this’ to ‘could you possibly underwrite this deal?”.

Matthew Sabban-Clare, a partner at European buyout firm Cinven, provided ‘Private equity perspectives’ at the end of the conference’s first day, alongside ECI partner James Stewart, who suggested that 2008 totals will be closer to (albeit ahead of) 2002 and 2003.

Noting that “there will be substantial losses”, Sabban-Clare said that private equity will return to a more traditional model, one involving the J-curve. “We can be very patient and are well capitalised at the large end,” he added, pointing to four transactions completed since the onset of the credit crunch, although one of them – the €200m acquisition of retirement solutions provider Partnership Assurance from Phoenix Equity Partners – was an all-equity deal.

Sabban-Clare said the firm would consider other all-equity deals, provided there was a clear path to putting debt into the mix afterwards, “otherwise you are just bridging debt in a world where lenders have refused to do so and that doesn’t make sense”. Minority positions would also be looked at, once again with the proviso of being able to apply private equity techniques and being an “active shareholder”.

Ultimately, said Sabban-Clare, private equity will have to deal with its past in the future, with 2005-2007 vintages due to be refinanced between 2013 and 2016. This will be no mean feat, as Simon Davies’ opening remarks had warned. “There was a collective belief that we had protected ourselves from problems,” he said. “How wrong we were about the new world order.”