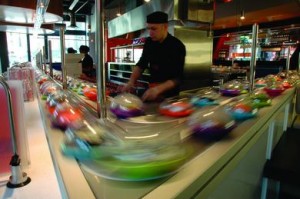 The conveyor belt sushi restaurant chain has been acquired by the Luxembourg-based financial institution together with the incumbent management in a secondary buyout deal with a value believed to be around £51m (US$102m).

Quilvest is buying the business from (PCL), which backed a £10m management buyout deal in September 2003 that left PCL with a 60.5% stake, founder Simon Woodroffe with a 22% stake, and the management – led by chief executive officer Robin Rowland – with 17.5%.

Yo! Sushi was founded in 1997 with one restaurant in Soho, London. Following the 2003 MBO, the group secured £17.5m of new banking facilities from Barclays Banks in December 2006 to fuel expansion and return money to shareholders. There are now 41 restaurants in the UK and overseas (Dubai, Kuwait, Dublin, Moscow and Kuala Lumpur). The company’s rollout plan is to have 100 restaurants by 2012.

Quilvest argues that its experience in the fast casual dining sector and its global presence will assist Yo! Sushi’s expansion plans. Axelle Strain, partner at Quilvest, said: “We believe Quilvest is uniquely positioned to help Yo! Sushi accelerate its roll out plans in the UK and internationally.”