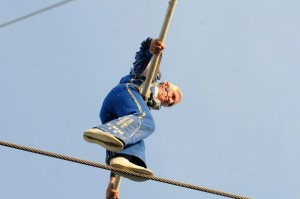 One of the biggest themes of 2014 was reflected at Buyouts Texas in early December: the high-priced deal environment and what it could mean for future returns.

On many panels and in conversations on the sidelines of the conference, private equity professionals talked about the high prices they have to pay for deals. In a quandary natural to private equity, GPs must continue making deals even in today’s environment if they hope to deploy funds before the expiration of investment periods on their funds, which generally run five years from the time a fund begins investing.

The stress on GPs isn’t likely to end any time soon, if certain conference speakers are to be believed. Many delegates said high prices would continue through 2015.

Fortunately, GPs at the conference didn’t just wring their hands over too much coffee and mini-cakes. They discussed the best ways to navigate the inflated deal environment. And some weren’t afraid to publicly admit their concerns.

Year to date, GTCR has paid an average of 10.4x EBITDA for new platform companies, Managing Director Craig Bondy said at the conference on Dec. 4.

Although considerably higher than market averages in the years leading up to the financial crisis, the 10.4x EBITDA multiple puts GTCR roughly in line with what other firms now pay to acquire new portfolio companies. Easy access to deal financing, along with a robust supply of investment capital, propelled deal prices to well above pre-crisis levels.

For transactions over $250 million, the median multiple for enterprise value/EBITDA multiples rocketed to 14.3x in the second quarter, according to a Pitchbook report. Multiples on similarly sized deals hovered around 10x for most of the previous two years, with transactions in the middle and lower-middle market floating between 6x to 8x for most of that period.

“I don’t know how long this cycle is going to last,” Bondy said in his keynote speech. “What I do know is that PE and the underlying industries that we invest in are cyclical, and that someone in this room will likely buy an asset at the top of the market. And they shouldn’t feel bad, because we did, too.”

Leonard Green & Partners is also paying higher prices than it has in the past, Managing Partner John Danhakl said at Buyouts Texas.

“What we’ve found is price never makes a bad deal a good deal, and it actually rarely makes a good deal a bad deal,” he said. “Given our investment horizon, what you buy is a heckuva lot more important than what you pay.”

Overall, higher average purchase price multiples are expected to bite into fund performance, based on an analysis of prevailing market conditions in the leveraged buyout market in 2014. The average targeted IRR for buyout equity fell to about 18.5 percent in 2014, down from 20 percent in 2012 and well below 27.5 percent in 2000. (See chart.)

Private equity pros said avoiding competitive auctions and being smart about deal sourcing will boost their chances of beating the average IRR.

Conner Searcy, managing partner at Trive Capital, described how the Dallas-based firm avoided an overly lofty multiple in the “really hot” unmanned aerial vehicles (UAV) sector. Trive found a mostly overlooked company, ISR Group, and combined it with another player in the space, outside of an intermediated deal process, Searcy said.

ISR operated a unique asset as the only UAV testing facility in North America that’s independently owned, plus it offered a strong relationship with the U.S. Army.

Trive approached Merlin RAMCo Inc, a provider of manned and unmanned flight operations and logistics support, about a deal to provide capital to buy ISR while purchasing a minority stake in the combined firm. The resulting deal built Trive’s current platform for the UAV market.

“That’s the kind of example of what we’re having to do in this marketplace to find stuff that you’re not paying 12x EBITDA for,” Searcy said in an interview after Buyouts Texas.

Trive’s debut fund, which closed on $300 million in the summer of 2013, is now nearly half deployed with five deals, he said.

Another example of a firm deftly navigating today’s high-priced environment is Insight Equity. The Southlake, Texas-based firm managed to acquire contract machining platform company Midstate Berkshire by swooping in after a higher bid from a foreign strategic player fell through. Insight Equity worked quickly and nailed down the acquisition within 40 days after receiving a call from Lazard Middle Market, which ran the process for motivated sellers Cerberus and SAC Capital, said Victor Vescovo, managing partner and chief operating officer.

“There’s a lot capital that needs to be deployed, the banks are bending over backward to try and put capital to work, and you’re also in a slow growth economy,” he said. “It’s a dangerous mix in terms of the potential to overpay for assets. If you’re not the highest bidder, you need to stay close to the banker if it doesn’t work.”

Vescovo said he expects to see some buyout shops hunt for smaller deals to find bargains. Others may pony up an over-sized multiple just to deploy ample supplies of dry powder.

Cressey & Co is willing to pay loftier purchase price multiples when the healthcare specialist expects rapid expansion at a target, said Partner Peter Ehrich. Even if a private equity firm buys at, say, 12x EBITDA purchase price multiple, and sells at 8x EBITDA, returns may still be attractive if EBITDA grows sufficiently during the holding period, he said.

“In times like this with credit conditions that push valuations up, the burden is on us to figure out how to grow the company,” Ehrich said. “What may look like a high number on trailing multiples may be reasonable based on future multiples.”

GPs aren’t the only ones concerned about high prices. Limited partners at the conference said they are taking the pricing environment into account when picking managers.

John Buser, managing director with NB Alternatives Advisers, said in his keynote speech that the fund of funds is “expecting multiple decline in a number of different companies that are finding their way into our portfolios. We’re looking to make sure we have managers that can overcome [that].”

Ultimately, funds of this vintage year could prove to be challenged because of inflated prices, just like funds that invested at the peak before the global financial crisis. The GPs who figure out how to pick companies that thrive despite the high prices they pay will be the superstars a few years from now.