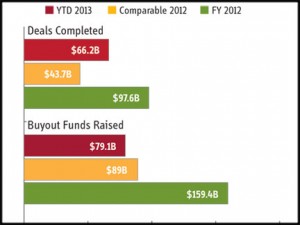 Over the past two weeks, Thomson Reuters, the publishers of Buyouts, counted 42 newly closed deals among U.S.-based sponsors. The total value of those deals that disclosed their terms was $3.6 billion, increasing the aggregate value of 2013 to $66.2 billion. Compared to this time last year, the latest figure far surpasses the $34.4 billion reported year-to-date in 2012.

The largest deal to close in the past two weeks has been the acquisition of the North American and European bakery supplies company CSM-NV by Rhone Capital LLC, a unit of Rhone Group LLC. The leveraged buyout transaction was agreed upon for EUR 1.05 billion ($ 1.362 billion) in cash.

The second largest deal during since our last issue was Madison Dearborn Partners LLC acquiring the entire share capital of insurance brokerage services firm National Financial Partners Corp through its subsidiary Patriot Intermediate Holdings B Corp. The deal was completed for $25.35 in cash per share for a total value of $1.016 billion.