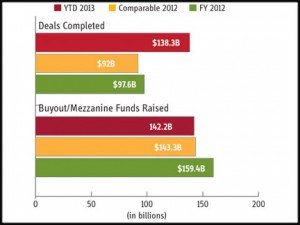 Notably, the Carlyle Group closed on the largest U.S.-focused fund since 2008 with Carlyle Partners VI at $13 billion after fundraising for 18 months. At the same time, GTCR collected about $3.25 billion for its GTCR Fund XI LP after just four months in the market, and is expected to reach a final close in early 2014 at its hard cap of $3.75 billion.

On the deals side of the market, Thomson Reuters, publisher of Buyouts, tracked 35 transactions that involved U.S.-based financial sponsors in the period from Nov. 18 to Nov. 29. Seven deals included financial terms that come to a total of $4.02 billion, while year-to-date deal volume increased to $138.8 billion.

The largest deal to close in the period was the acquisition of The Crosby Group LLC by an unnamed affiliate of KKR & Co LP. The Tulsa-based manufacturer of metal products was acquired for $1.01 billion in a leveraged buyout transaction.